We use cookies to collect anonymous data to help us improve your site browsing experience. 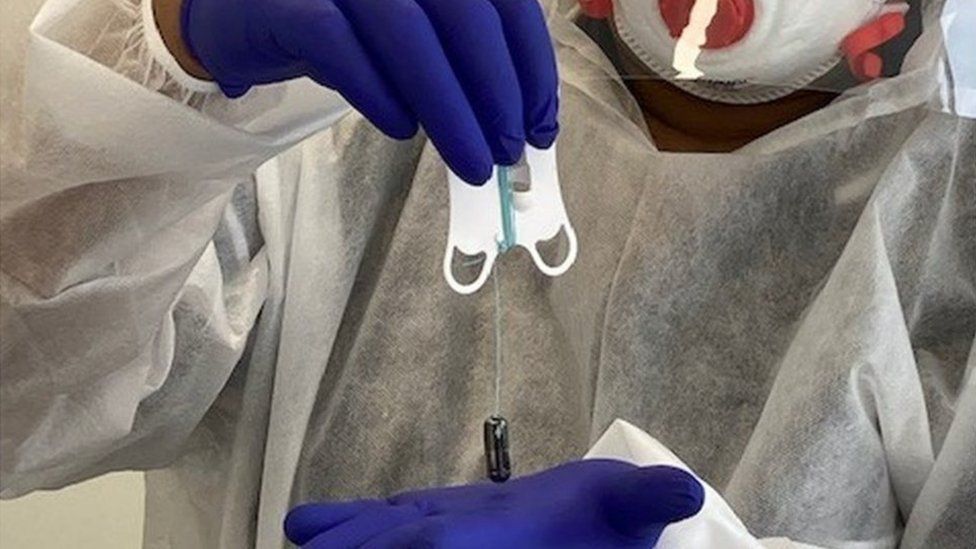 Scotland has become the first country in the world to implement a new, non-invasive test for oesophageal cancer.

The cytosponge or "sponge on a string" will be offered to some patients as an alternative to an endoscopy.

It can detect a pre-cancerous condition called Barrett's oesophagus. The test is being rolled out to all Scottish mainland health boards after being piloted in NHS Greater Glasgow and Clyde, NHS Forth Valley and NHS Lanarkshire last year.

The Scottish government said it "enables faster diagnosis of patients" and is a "more patient-friendly test".

The same tests are being offered in health trusts across England as part of a pilot - NHS England said this should see 10,000 tests offered over a year.

Early signs of oesophageal cancer, the seventh most common cause of cancer deaths in the UK, are often mistaken for heartburn.

The cytosponge procedure involves patients swallowing a small pill attached to a thread.

The pill's coating then dissolves in the stomach, leaving a sponge that has been compressed in that capsule. It is then pulled back up, collecting cells on the way to be analysed for any abnormalities.

Elizabeth McEwan, who had the procedure at Forth Valley Royal Hospital, said it was a "very easy and very comfortable alternative" to an endoscopy.

She said: "The device is put at the back of your throat to swallow with a big gulp of water. There was no gagging sensation as the string it's attached to is tiny.

"Five minutes later the nurse asked if I was happy with her pulling it back up and if I would like some throat-numbing spray, which I agreed to.

"It was about eight minutes from swallowing it and I could walk straight out."

The latest statistics show the number of people being diagnosed and starting cancer treatment during the first year of the Covid pandemic dropped by thousands.

Clinicians say there have been serious repercussions for patients waiting for diagnostic endoscopy, which the cytosponge could alleviate.

The procedure only takes about 10 minutes, according to its developer Prof Rebecca Fitzgerald.

"You swallow the capsule on a string with water and it will go down to the top of the stomach.

"The capsule will dissolve in five to seven minutes, and as it dissolves out pops a sponge which has been compressed in that capsule.

"The nurse simply pulls the sponge out with the string and it will collect about a million cells on its way out.

"The sponge is put into a preservative and sent to the laboratory where it is tested to see whether there are Barrett cells or not and whether the cells look like they are turning to pre-cancer.

"The patient is then told, and if there is anything to worry about, they can have an endoscopy and treatment."

"Such early diagnosis at scale across Scotland could revolutionise the outcome of what is now a poor outcome disease."

The cytosponge was developed at the University of Cambridge by Prof Rebecca Fitzgerald, whose team has now trained nurses across all the health boards in Scotland.

The Scottish government's health secretary, Humza Yousaf, said: "Cytosponge is part of an accelerated rollout of innovative technologies being embraced by Scotland's NHS to support the resumption and recovery of vital health services that had to be paused because of the pandemic.

"It is a much simpler and more patient-friendly test than endoscopy that enables faster diagnosis of patients at risk of pre or early cancer, without the need for them to undergo a more invasive procedure."